I got an interesting question from a reader. It shows how poorly traditional sourcing agents’ incentives are aligned with those of their customers (who get paid X% of the value of the goods).

The sad reality is, it makes perfect sense for the sourcing agency to keep working with the same suppliers. There are many reasons for that:

That’s why I believe that, as long as a sourcing agent is paid X% of the value of the goods, the incentives are not right.

And this situation happens on many markets. Sellers of real estate suffer the same issues, as detailed in Why a Real Estate Agent May Skip the Extra Mile in the New York Times. 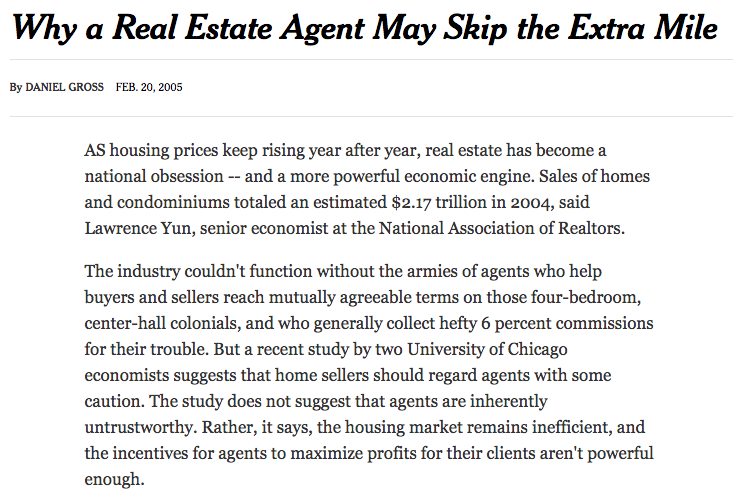 Real-estate agents in the US collect about 1.5% on the value of the sale in their pocket. And they don’t always push for the highest selling price…

A recent study by two University of Chicago economists suggests that home sellers should regard agents with some caution. The study does not suggest that agents are inherently untrustworthy. Rather, it says, the housing market remains inefficient, and the incentives for agents to maximize profits for their clients aren’t powerful enough.

Here are details about the study:

Along with a colleague, Chad Syverson, Professor Levitt set out to prove it by comparing data on homes that agents sold on behalf of others with those that they owned and sold for themselves. They analyzed sales from 1992 to 2002 of 98,000 homes in suburban Chicago, of which 3,300 were owned by real estate agents. When the economists constructed an analysis that controlled for amenities, location and the adjectives used to describe the houses, they found that agent-owned homes, on average, stayed on the market 9.5 days longer and commanded median prices that were 3.7 percent higher than comparable homes owned by clients.

And they conclude that incentives are poorly designed:

The two professors conclude that poorly designed incentives bear some of the blame. “You have to keep in mind that the agent’s incentives don’t line up perfectly with your own,” Professor Syverson said.

Here is the mechanism they seem to demonstrate:

If a home sells for $500,000, the agent personally receives $7,500. Not bad for what may be just a few days of work. If the agent works for an additional week and urges the seller to hold out for $515,000, that’s an extra $15,000 for the seller, but only an extra $225 for the agent. Because every additional dollar throws only a penny and a half into the pocket of the agent, the economists reason, the agent may push clients to accept lowball offers.

I believe something similar is happening in the China sourcing world.

So, as an importer, what can you do?

If you want to keep paying your agent(s) on a percentage basis, you can lower the base percentage (say, 5% instead of 7%) and then give them an incentive to get lower prices (by giving them 8% for the first year on orders that were negotiated for a price at least 5% lower than before).

This might be difficult to negotiate with your agent. The truth is, they are in a comfortable situation and they don’t really want to change anything.

Another solution is to work with what I call a ‘third-party service provider’ in this article. They charge fee for their work. You want them to take on some new projects, they charge you based on the amount of work. Fair, simple, and above all without all types of nasty incentives.

Does it make sense?