You are here: Home / China Insights / How Running China like a Business is the Recipe for Economic Domination 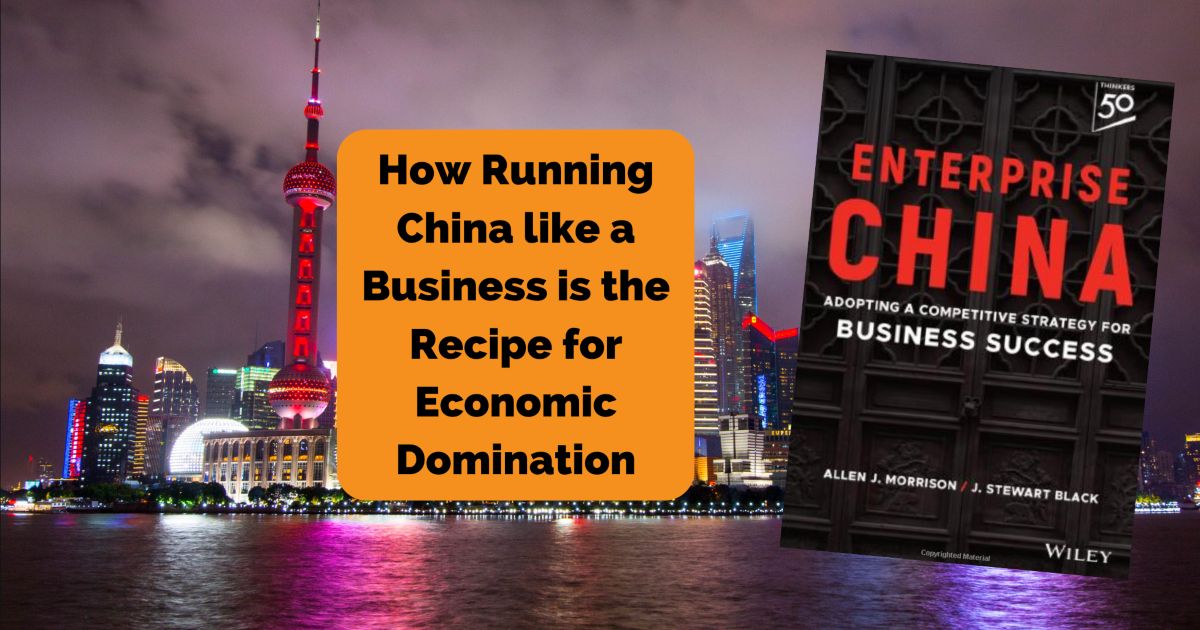 The book provides a great overview of how China runs itself like a business and the strategies that it uses for economic success. This is helpful knowledge for foreign businesses because it also provides approaches on how to compete with domestic companies in the Chinese market and how to compete with their businesses who are targeting your markets worldwide. They also give their insight into risk analysis and risk mitigation for companies buying products from China.

What is ‘Enterprise China’ about?

Based on their decades of experience working in and with the Chinese and foreign companies in China, the book is written as if China were a company. With plenty of interesting examples showing its strategy for success. (02:02)

There are 3 strategic pillars to China’s strategy for success.

1. Reducing (or eliminating) their external dependency on importing key technology

‘Made in China 2025’ identified 10 areas where this was important. The results have been mixed: Very advanced semiconductors is one area where they are struggling, but they have made a lot of progress in a large range of other industries. (03:39)

Chinese companies should take a significant (70+%) market share in 10 defined industries that are seen as future drivers of economic growth. Also, the State is heavily involved and owns 150,000+ state-owned enterprises as well as great influence over ‘private’ companies and generous subsidies to help domestic enterprises excel, which can be very different to the West. This also means that businesses are not fully independent and must toe the line with the government otherwise Beijing will step in to correct their course – see the delisting of Didi (a ride-sharing company that is 3x the size of Uber) that cost them $60 billion in value and derailment of Ant financial’s $30 billion IPO that would have valued the bank at 300+ billion as well as a $2 billion fine. This close relationship between State and business means that the odds are stacked in the favor of domestic enterprises and foreign enterprises, while able to operate in China, may have a tougher time than their local competitors by design. (06:00)

For three years in a row, China had more companies on the Fortune 500 list than the USA and many of those are state-owned enterprises. Any business involved in technology and manufacturing is at risk of Chinese competition globally. High-speed rail in China is a good example of a Chinese industry that incorporates the three pillars because they were dependent on Japan, France, and Canada for their HS rail network initially and the foreign companies made a lot of money, but over time those businesses had to partner with domestic companies, and in under a decade the domestic companies were winning the bulk of the business as they had the capability to operate without foreign expertise. But then the foreign companies found that the same Chinese companies were competing with them for other overseas business, and winning due to their lower capital and labor costs that made them 30-40% cheaper. (17:23)

Why Western companies seeking growth by looking to the emerging markets may be too late to the party.

Large Western companies looking to grow see low growth in Europe, a shrinking economy in Japan, and a hotly contested market in the USA. Emerging markets offer 5-8% growth. But China has already been moving into South Asia, Africa, and South America, blocking Western companies. This dominance using its scale and relationship with the State allows China to compete with the West and move up from the bottom by targeting emerging markets and will give it the ability to grow in the long term. (20:55)

How should companies who buy from China do their risk analysis when considering diversifying supply chains to include other sources other than just China?

Being solely or too dependent on China is a risk, and both Covid and politics are increasing your risks. It would be wise to have parallel sources in other countries and there are alternatives to China in most cases when it comes to raw materials and labor costs. Where other countries like Vietnam, etc, don’t compete is in infrastructure. No country in Asia has world-class ports, rail systems, road networks, etc. Even if other countries provide lower production costs, it may not offset the additional logistics costs. This needs to be weighed up with the risk of dealing with China, and the US, Canada, and the UK in particular have worsening relations with China that could increase the risk for businesses there in particular.

Simpler products like salt shakers, for example, are still going to be low-risk imports from China as they are unlikely to be targeted by tariffs, whereas complex products with embedded technology are riskier.

Even when dealing with manufacturers in countries like Vietnam, they are often part-owned by the Chinese, so quite thorough due diligence is required when trying to implement a China+1/many strategy and this will also help when trying to get transparency into issues like forced labor, environmental impact, and, simply, where things are coming from, all of which are more likely to be required by countries products are being imported to now or in the near future.

As a minimum, diversify suppliers within China so as not to be dependent on just one supplier or one area within China while you look into sourcing outside of China from companies that are not connected to Chinese State-owned enterprises. (23:44)

How about following a Zero-China strategy?

Recently Honda explored the idea of building a zero-China supply chain for products to be sold in markets like North America, but is this a realistic goal?

Sourcing in China for products aimed at the domestic Chinese market is a relatively low-risk and high-reward approach. For products or markets outside of China, reducing China exposure to zero is almost certainly impossible – just finding out the ownership of component suppliers for an automobile dashboard down to its third or fourth-tier suppliers took researchers at Arizona state university two years. Most businesses will struggle to get this information and oftentimes it will include Chinese suppliers.

Rather than aiming to remove China from the supply chain, reducing exposure to high-risk items (high-value and high-technology products in market segments targeted by the Chinese) coming from China could be a more sensible approach, because lower-tech items are unlikely to be disrupted by politics, etc. (31:21)

‘Enterprise China,’ when it’s on sale, and where it can be purchased from.

You can purchase the book from December 1st 2022 from all good booksellers, for example, here is a link to it on Amazon. (34:53)