You are here: Home / Risk Management / How to deal with the Chinese New Year Disruption in 2023

Did you know that Chinese New Year 2023 is coming particularly early this year in January 2023? 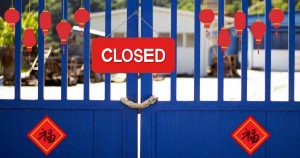 If you have suppliers in China, you need to be aware that this holiday period is likely to lead to a disruption in supply while their factories are closed down for weeks during the holiday. But the challenges don’t end with just a shutdown, the time periods surrounding CNY also have certain risks as manufacturers start to slow down or fight to ramp production back up. Luckily there are actions you can take to get through this period, so keep reading (or listening) to learn what they are!

When is Chinese New Year?

CNY is coming on Jan 22nd 2023, but if you haven’t placed orders from China to be delivered before the holiday yet (as of mid-Nov’ 22), then you’re looking at after January for delivery now. Most exporting factories take around 2 weeks off, but non-exporting factories such as their components suppliers may be off for 3/4 weeks! (00:30)

Be aware if your suppliers are likely to be busy around this time.

This may depend on their planning systems. There are always some suppliers who are over-committed and a shipment targeted in December can easily be bumped until March because they can’t finish it on time, then CNY happens and it takes until well into February for them to ramp production back up and have the order ready for shipping. This is especially true for smaller customers, as your production will tend to be delayed in favor of their major customers’ orders. Therefore orders that need to be shipped before CNY really should be placed in October/November at the latest now in many cases.

Having a contract with penalties may not even help in this case, because if a supplier sees that they’re over-committed they may drop the order if they know they’re going to lose a lot of money which is a disaster for you if you already paid a deposit.

This is not limited to China either, factories all around Asia can end up being over-committed on orders and ship far later than buyers require. We recently wrote about a case like this in Bangladesh. (02:27)

Why the risk of naughty factory owners taking your money and running is higher just before CNY.

Some sneaky factory owners try to collect deposits before CNY for shipments afterwards knowing that they’re going to shut down the company, taking your money and running.

The risks increase if you pay them before CNY and are perhaps even worse this year because China has had a tough time economically, like many countries, for the past couple of years or so and many factory owners are in debt. They may owe money to loan sharks, so the only way to avoid them is to take your money, move far away in China, and disappear…it happens! (05:37)

Do you have enough inventory to carry you through the holiday?

Do you have enough inventory in stock now to last you until, say, March 2023? Do you have a shipment planned for after CNY that will replenish your essential stocks? If your suppliers are usually unreliable with delivery times, this will be even worse around CNY, therefore preparation in advance is needed. (08:54)

There is a lot of uncertainty in China in the manufacturing industry.

This is a relevant point because it adds fuel to the fire with regard to the uncertainty of your supply and potential disruptions to the already guaranteed disruption of the CNY period. Recently Covid cases were increasing in Guangzhou, the capital of Guangdong and a major manufacturing hub, and this has led to quite extreme restrictions there. Because GZ is so interconnected with neighboring cities like Dongguan, Foshan, etc, the restrictions are liable to spread, too. Indeed, the controls led to violent protests in certain districts as frustrations boiled over among the local population there.

Aside from Covid, China has recently suffered from extreme weather (high temperatures), power outages, high shipping costs, shortages in electronic components, travel restrictions, and more. Also, political tensions between China and the West have increased quite a lot this year fuelled by negative rhetoric in the media and concerns about Taiwan.

Chinese suppliers are investing overseas to try to help customers diversify supply chains, but the travel restrictions have slowed their plans to invest in SE Asian countries and even Mexico because it has been tough and slow to send staff abroad to set up operations and perform training for local workers. This makes some Western customers nervous because they continue to have a supply chain solely based in China which they want to diversify ASAP, but the plans are slow to come to fruition.

All of this has led to fatigue for Chinese manufacturers. (11:28)

Why NOT to have all your eggs in the China basket…

In Zhengzhou, the huge Foxconn plant with 200-300,000 workers had an omicron outbreak recently and numerous staff escaped to flee back to their hometowns because they were frightened. This caused alarm around Northern China that it might spread even more widely. This demonstrates the risk of having all of your eggs in the China basket alone because all it takes is a few cases and an enormous plant like this could be closed or severely disrupted. With most Asian countries and even Hong Kong opening up to foreign travel, China stands alone with Zero Covid and this does cause disruption for importers with China supply chains who have difficulty even visiting. (19:13)

Would it be realistic to schedule orders to be produced by suppliers outside of China in and around the CNY period as a way to reduce the risks of disruption of supply?

If businesses have a backup supplier in a different country able to make products during CNY while countries like China (and Vietnam) are closed down, this is a good option. You can check the seasonality of your Chinese supplier’s business and pinpoint their busiest times, perhaps just before and after CNY. These are the times when you would schedule production in, say, India or Mexico because you can avoid piling even more pressure on the Chinese supplier during their busiest time which is more likely to lead to mistakes, delays, etc. (24:12)

Why the time period before and after CNY is also a ‘red zone.’

CNY leads to factories shutting down which means no supply during that time, however, the time period leading up to and following the holiday is also dangerous for importers. As we approach CNY suppliers tend to be rushing to complete orders before the holiday, working day and night to complete orders and ship on time. This can result in orders being delayed until after CNY because they ran out of time and the workers went home before they were completed, or, worse, a rushed order filled with defects being shipped to you (meaning that you’ve paid in full for a container of sub-standard products). This is why before (and after CNY) many businesses choose to perform more product inspections to avoid this scenario (although bear in mind that companies like Sofeast that provide inspections also tend to get busy around this time, so, please, book ahead where possible).

After CNY is also a risky time for importers because a lot of older and more experienced staff leave for new jobs (especially if they’re migrant workers) meaning that your supplier’s factory may need to hire and train fresh new workers. In fact, some factories have a turnover of 25%+ of workers, and this can include important roles like production and assembly operators, line leaders, inspection staff, etc. This, unsurprisingly, has an impact on quality and production. (26:13)

When is it safe to start ordering as normal?

You need to speak to suppliers and give them forecasts, etc, so they lock in a specific time period for orders that makes sense for your schedule. Communicating with the supplier is really important, and if you do feel that they’re too busy or you have to order during a traditionally busy period, increasing the regularity and intensity of inspections, for instance, will be a safeguard against issues. (32:49)