You are here: Home / China Insights / 2022 Review: The Key Stories for Importers from China/Asia 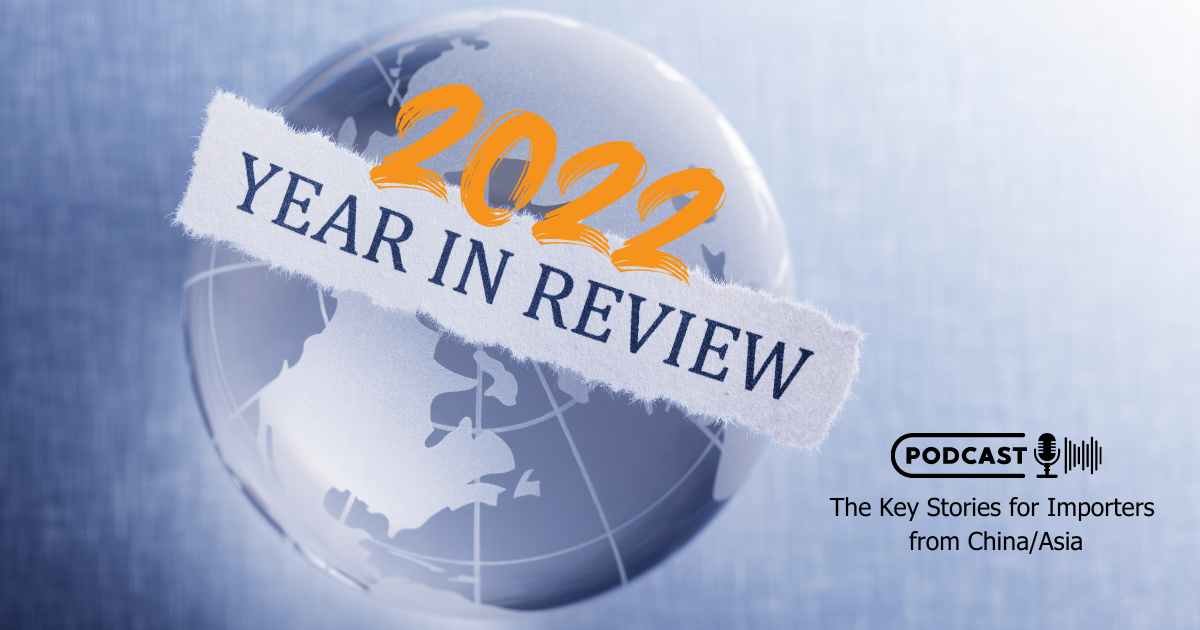 QualityInspection author and Sofeast Group CEO, Renaud Anjoran, and Adrian from the Sofeast team look back at 2022’s key news stories and topics that have affected importers with supply chains in China and other Asian countries. What’s changed and will we see the same in 2023?

Covid has continued to be problematic in China for numerous reasons, even now that the Zero Covid policy has been dropped, the Russian invasion has the world nervously looking at China’s actions towards Taiwan, the USA and China continue to fight a trade war, and other Western countries’ relationships with China have also started to worsen. That’s just a few of the stories discussed!

They also fill you on the Sofeast group’s activities and achievements during 2022, as well as listing our most downloaded podcast episodes and some of the best pieces of content we published over on Sofeast.com!

Strict zero covid regulations have been followed for most of the year in China, hampering the ability to visit, and causing localized disruptions where there have been temporary lockdowns due to cases rising.

However, due to the spread of Omicron and protests from the public, the policy was dropped in December following angry national protests and we’ve seen an explosion of cases as a nationwide wave builds. This has caused disruption in manufacturing, inspections, audits, etc, as staff have been absent due to illness.

Was this spread caused by the lifting of zero covid in light of the protests? Probably not. Omicron is so infectious, it was probably inevitably coming at that point.

All this being said, China will be opening up its borders by Jan 8th 2023, so accessing China will become a lot easier for foreign travellers very soon. (01:20)

Logistics and shipping costs and availability.

A good news story for 2022 was the return of shipping and logistics to ‘normal.’ This was a huge issue in 2021, but it changed rapidly in 2022 and now importers don’t have such high costs. In fact, there are too many containers and they’ve been being used to make cheap accommodation and for other clever purposes.

Staff illness due to covid could affect shipping from China in the short term. (08:57)

Importers moving manufacturing into Eastern Europe have been impacted. Energy costs have risen in Europe particularly. Russia is now seen as a risk and is heavily sanctioned which affects some businesses that traded there.

But the situation has caused more scrutiny of China’s motives regarding Taiwan. What would happen if they invaded? Economic effects for China and the world would be huge if the West sanctioned them in the same way as Russia. Western media does arguably give a grim view of China, though.

The risk of dealing with China has increased for Western businesses, for sure, and we see businesses diversifying away from manufacturing in China alone. (12:06)

The USA has been trying to limit China’s access to cutting-edge microprocessors to hold back their high-tech industries and military. Taiwan has been investing in microprocessor manufacturing in the USA, and times have changed since 2021 when there were shortages of components like this that caused a lot of manufacturing disruption and delays.

In terms of the trade war, tariffs on some China-made products are still in place and the US Congress has been looking at other ways to hurt China. The UFLPA has been enacted and aims to stop the importation of products with any link areas of China where forced labor is suspected. The inflation reduction act also pushes for the relocation of solar manufacturing, etc, into the USA from China, but can businesses in the West really compete?

The risk of making non-high-tech products in China remains low for businesses in America and other Western countries, although there is increasing friction at a political level. (15:14)

Political friction increasing between the West and China.

Most Western countries, perhaps with the exception of Germany out of the larger economies, are going through a period where China is treated as ‘the bogeyman.’ Western media paints a grim and threatening picture of China, perhaps similar to Russia, especially with concerns about Taiwan. How warranted is this? Arguably it’s politically beneficial to focus the public’s attention away from rocky domestic matters in 2022 and into 2023. China-made products perhaps aren’t criticised that much, but politically China is criticised a lot. For example, here is a recent British article about increased Chinese military aggression being the ‘new normal.’ There are usually more stories in the UK media in particular that paint China in this kind of light than those that are positive about the country. (21:03)

The expansion of Chinese-owned enterprises around the world and the future of ODM products.

Chinese enterprises have been diversifying their holdings globally. SE Asia particularly, due to its large number of Chinese speakers, has been expanded into by many Chinese enterprises (only Thailand really is not that favored by the Chinese). Eastern Europe and Mexico are also being invested into (we can see a lot of Chinese businesses in a large industrial park outside of Monterrey, for example), and this is expected to keep growing in the next few years.

Until recently, countries like Mexico, Poland, Turkey, etc, usually couldn’t provide the turnkey ODM manufacturing solution that China does. In China, a manufacturer can offer you 200 styles of a product for you to white-label and distribute under your brand. Yes, this can be low visibility and higher risk, but to develop a new product from scratch is costly and difficult for many SMEs, but, aside from in China, is almost necessary when manufacturing in other countries.

Chinese-owned enterprises around the world have changed that these days. Now you can increasingly get the same benefits as when dealing with an ODM company in, say, Shanghai, but in, say, Poland, Czechia, or Mexico. (24:27)

These episodes were the most popular with you all this year.