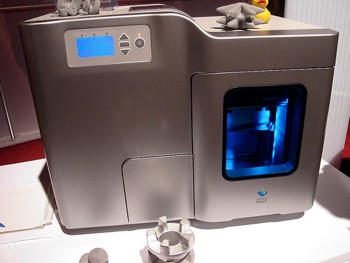 Two days ago I was listening to a few Chinese factory managers who were invited to a Global Sources forum, and one hot topic they discussed was 3D printing.

They see 3D printing as a potential disruption to their business, but in a time horizon that is quite unclear.

This concern makes sense. There is strong overlap between the categories where China is more competitive than other low-cost Asian countries (DIY, power tools, toys…) and what can be easily 3D printed.

A few words about the technology

A 3D printer can make 1 piece at a time, with a precision of 0.1 mm or less. Desktop-size printers are already available on the market, and are capable of making small products in virtually any shape.

A support to mass production

3D printing is already used by quite a few large companies for preparing pre-production prototypes. This way, they cut a good part of the development process for new products. They can just say “here is exactly what we want, please make a counter-sample”.

3D printers should also be very useful for making dies and tools quickly — and probably even elaborate molds for injection.

A complement to traditional mass production

When production is in China, coming up with spare parts in a timely manner is a nightmare. I am pretty sure 3D printing will be adopted for making parts, as soon as technology and prices make it feasible.

3D printing is also adopted for the production of components that are difficult, or even impossible, to make using current manufacturing techniques. Virtually any shape can be printed. Car and plane makers are already finding applications for 3D printing for this reason.

If price remains an issue, this technology might still be used for quick production of extra pieces in the consuming country. It might make a lot of sense for seasonal and fashion items, simply because a re-order from China is not an option when the goods are needed within 3 weeks.

Toward a gradual replacement of mass production?

The promise is amazing: having an object made in the neighbourhood’s printing business, or having it made to order and shipped from a local business. Eliminating shipments and inventory would feel great, wouldn’t it?

But let’s look at the assumptions behind this promise.

# The hardware price and the “ink” price will allow for economic viability. I guess it won’t be a problem, for three reasons:

# The printing process will be fast enough. Right now speed is probably the main obstacle, but the process will certainly become faster and faster with time.

# The intellectual property rights of the 3D designs will allow small production lots in an affordable manner. The good news is, more and more open-source 3D designs are available to every one. And IP rights holders who want to monetize their designs will probably try to charge micro-payments or subscriptions.

# End customers will be willing to wait for the product to be 3D printed, and the lack of packaging and testing won’t cause issues. For many categories, it should be fine. Other attributes, such as last-minute and customer-driven customization, should help adoption of 3D printing.

# Quality will be high enough — that will probably not be the problem, since 3D-printed parts are already used for hip replacements.

What product categories would be disrupted first?

Hard goods made of only one material are an easy target. By the way, 3D printers are starting to make products out of several materials.

DIY products, jewelry, smartphone casings, and a few other categories are already down that route. Have a look at what Shapeways offers if you doubt it!

3D printing, if it takes off the way many people anticipate, will also be a huge challenge to many brands, since they won’t have a hold on distribution the way they currently do.

Let’s say everybody can print a basic barbecue grill in their local hardware store, based on open-source designs, and with the exact attributes (size, colors…) they desire. Will some customers be interested? Yes, probably, if the cost is lower than China-made BBQ.

Will China be left aside?

One thing is certain, many people here are well aware of this technology.

From what I heard, the Chinese army is very interested in 3D-printing complex weapon parts that it is not currently allowed to purchase. The government probably doesn’t want to rely on printers that are controlled by firmware coded in the US, and is probably helping an emerging domestic production base.

There are already a few Chinese producers of 3D printers (I found 2 on Global Sources). I wouldn’t be surprised if, in 2 years, more than 50 Chinese manufacturers offered their own models!

However, I don’t see any disruption to mass production in the coming 5 years. It is like the “reshoring from China to the US” movement: plenty of anecdotes in the press, but insignificant impact overall.

3-D Printing Will Change the World