You are here: Home / Process Improvement / Suggestions for factory improvements in China: make it visual

Last week I spent two days in a factory, studying a process and thinking of ways to improve it without spending any big money.

It made me realize something very important about communication with Chinese people.

They are happy to buy into an idea that is proven, but they won’t give a chance to something that is “up in the air”.

Here is how it went.

I wanted to improve the flow in a powder coating workshop. Metal parts arrived after several baths, went into an oven, got covered in powder, went into another oven, and then were checked & packed.

Conceptual communication: I told them the flow seemed crazy to me, and moving some tables would be necessary. They resisted the idea.

Visual demonstration: I drew the current flow, and then drew the “ideal” flow. It got their attention.

Here is the current flow (before any changes): 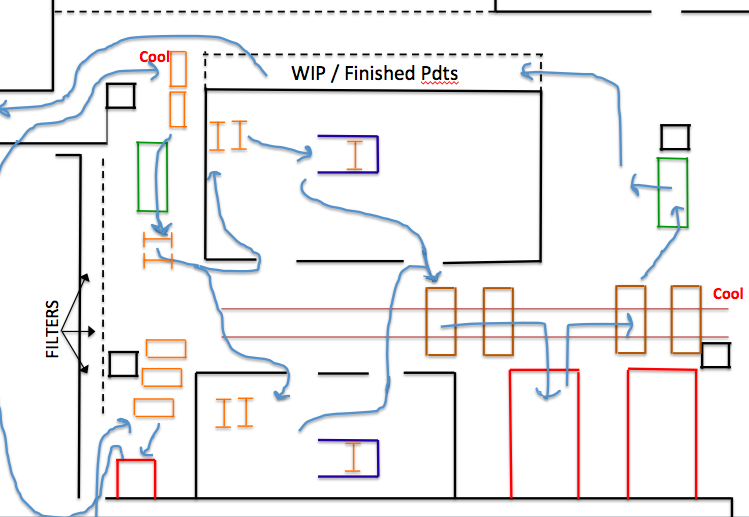 Here is the improved flow I suggested: 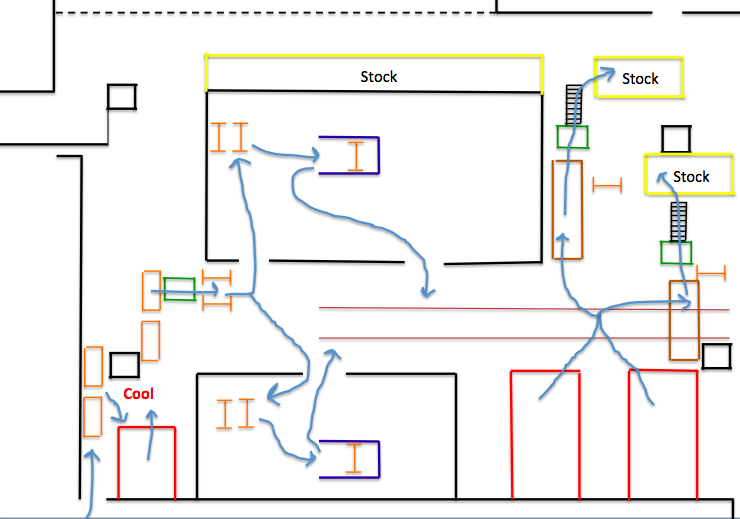 The problem was, they looked at it and then they rejected it. I wanted 2 places where the parts could cool down, but they didn’t like the idea.

Conceptual communication: I used my broken Chinese and hand gestures to show where each element would be. They got it, they gave a few objections that forced me to revise the plan, but in the end they were still shaking their heads.

Visual demonstration: I cut little pieces of paper, and did a simulation. In 10 seconds, they played with it and saw that it did work much better than their current system! 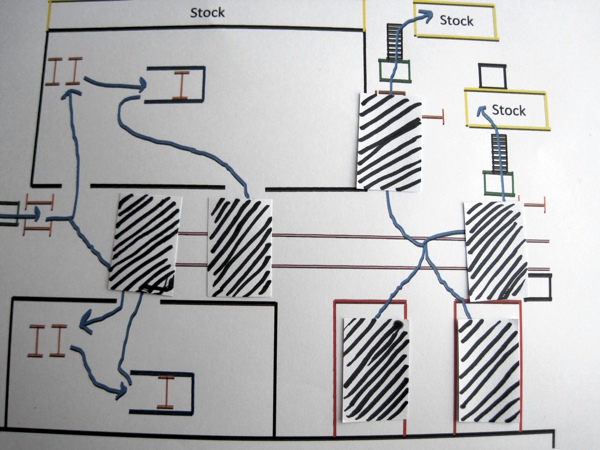 Once they agreed to the idea, we broke the idea down into 6 actions to take, and assigned deadlines: 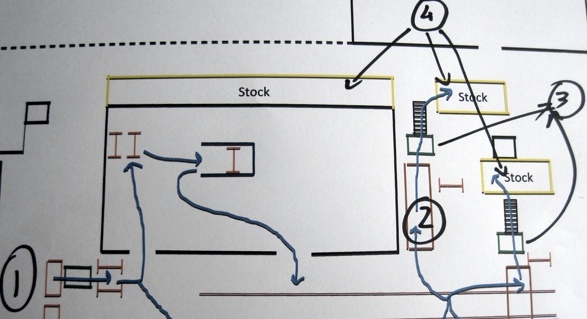 Within a week after I left the factory, all was in place. The general manager pushed for it, but more importantly the workshop supervisor had bought into the idea. They removed a total of 8 people (both shifts combined) from this workshop!

I think this example illustrates nicely the difference between conceptual explanations (the way Europeans and Americans often like to communicate) and visual demonstrations.

The Chinese are very down to earth, and I don’t mean this in a bad way. They want to see that an idea is working before they adopt it.

That’s one reason why they prefer to copy an existing product that is popular on the market, rather than make a bet on an unproven concept.

And, to be sure, there are many ways to prepare a simple mockup. But I have seldom seen Chinese engineers prepare one. That’s why there are so few attempts at optimizing production.

Here is another example. This is a story from Camilla Christensen, told in (easily?) Made in China:

[The Chinese engineers] could not read the designs and did not understand that a curve is not any random rounding! So we were in fact at a much lower level of comprehension than what we had assumed. Just in relation to reading the designs, it ended with me sitting in the evening cutting little 1:1 templates, which I could show the supplier the next day. And suddenly, we had 10 Chinese people nodding. The penny had dropped.

From now on, all my suggestions for improvements in flow or in layout will be mocked-up in one way or another…

Does it make sense to you?