You are here: Home / Sourcing New Suppliers / Overview of the Indian Production Sector

Our assistant Maria keeps working on the series of articles on low-wage countries in Asia. This time it’s about India.

India’s ailing manufacturing industry is rooted to its history

The years that followed India’s liberalization in 1991 gave the country’s economy a boost it had never experienced before. The service sector tasted strong growth, and many experts considered this a benefit from having a talent pool that was English-proficient and has a strong British culture background. In no time, the services sector propelled India’s GDP and international trade and investment on top of its game. However, the manufacturing industry had barely contributed to this economic feat, putting in only 16% of the 56.5% provided by the services sector. 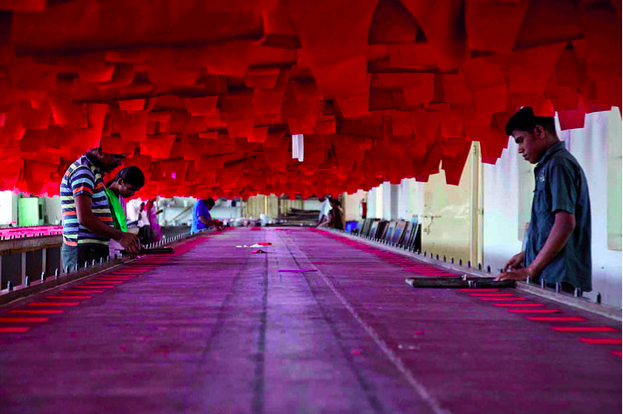 It’s been more than two decades now, and though there are little improvements, there still seems to be no positive solution to these issues.

The overall GDP growth from 2013 to 2014 was at 4.9%, according to the Central Statistics Office. This implies that the Indian economy is performing well, as the rate is slightly above the 4.5% GDP growth recorded from 2012 to 2013. But while this maintains India in a positive light, manufacturing productivity is lagging, with a decline of 0.2% (last year’s number was a 1.1% growth). This predicament has been pulling the entire Indian economy down since 1999.

Today, India continues to manufacture various goods. Engineering-inclined products, such as metal parts, castings and forgings, and pumps and compressors, top its manufacturing production and constitute 19% of total annual exports. This is followed by jewellery (15%), chemical products (13%), agricultural products such as root crops and rice (9%), and textiles (9%).

The production clusters include Chennai, for IT and auto parts, Tirupur, known for its knitted garments; Ludhiana, for mass production of knitwear; Surat and Mumbai, for precious gems and jewelry products; Kolkata, Agra and Chennai, for leather and leather products; and Maharashtra, for Paithani sari (cloth woven by hand and made of very fine silk).

India also remains as Asia’s largest refined product exporters in the world, led by petroleum, which constitutes 18% of total exports. The UAE and the US receive most of the country’s manufacturing products, followed by China, Singapore, Hong Kong and the Netherlands. India also manufactures goods for adhesive and films, building and construction materials, machinery tools, resins, and even tobacco products.

India seems to be on the path to a manufacturing boom

In the recently concluded World Economic Forum held in Davos in January 2014, Anand Sharma, India’s Union Cabinet Minister for Commerce and Industry and Textiles, stated that it is in pursuit of creating over 100 million skilled jobs focused solely on the manufacturing sector. This will be done by elevating the manufacturing sector’s share of GDP to 25% from 16%.

At the outset of 2014, Indian factories began the year with a spirited performance. Manufacturing giants in Bangalore, New Delhi, and Mumbai (cities that currently lead the manufacturing commerce in the entire country) set a record-breaking activity, making domestic and overseas orders increase dramatically.

Various economic experts in India believe that the most urgent need the country must focus on to translate its comprehensive manufacturing improvement plans into reality is to advance India’s physical infrastructure. This consists of factory-to-cities roads, better manufacturing technology, and advanced business establishments.

If done properly, this undertaking would encourage local and international direct investment solely in the manufacturing sector. As of today, many giant corporations and business organizations around the globe still see India’s infrastructure below industry standards.

An improved infrastructure, it is believed, will attract many investors to put more money in manufacturing businesses – not only in the cities – but also those that are located in the rural areas. These will also provide additional employment in labor-intensive, less technology-intensive manufacturing, regulated through human rights-inclined laws, which would soon cater to the needs of the modern Indian economy.

The Indian manufacturing industry seems to have a bright future, as China gets more expensive and as the government sets ambitious goals. Let’s see how it turns out in the coming years!