You are here: Home / Process Improvement / A simple method to find a production problem’s root cause(s)

The biggest frustration I have with Chinese engineers is their lack of interest in fixing the root cause of a problem.

Let’s say a machine’s printing mechanism deviates to the right, and their customer’s logo is totally disfigured. If they know their customer, they understand it is a real problem.

So, what will they tend to do? A correction. They will reposition what has deviated, so that the logo looks good again… for now.

And what do they tend to forget? The corrective action — making sure it doesn’t happen again by eliminating its root cause.

1. Obstacles to root cause analysis in Chinese factories

Corrective actions take time and brainpower. It usually involves a discussion with operators, who probably know the machine’s behavior much better than engineers do. It requires observation, experiments, and followups (I described an excellent approach in this article)… While the container needs to get out the door tonight!

But the main obstacle, I feel, is cultural. I can’t put my finger on it, but there is something in the Chinese education system and/or culture that drives a lack of interest in long-term solutions.

2. Poor understanding of the usual root cause analysis methods

You can teach the “five whys” of the “fishbone diagram” tools to Chinese engineers, but it will take them a LOT of time to apply them in the right way.

A frequent mistake is to designate a worker’s lack of discipline as the root cause. And to avoid going further (is this really lack of discipline? Or poor training? Or poor work standards?…), which makes it ineffective in driving improvement.

3. A really nice tool for root cause analysis

I just found a nice flow chart in an article (“Probable Cause, Using probability to get to the bottom of the issue”, published in Quality Progress of Sept. 2013 by Moreno Broccoletti — registration required): 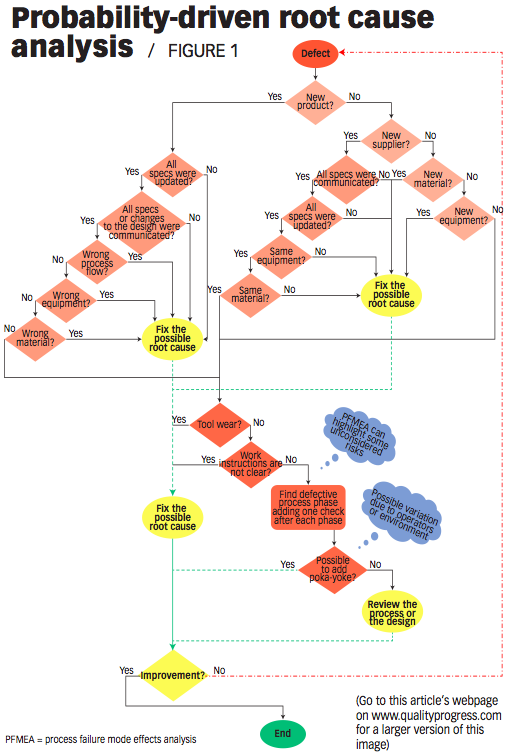 I think this flow chart can be very useful in Chinese factories for 2 reasons:

What do you think about this tool?