You are here: Home / Supply Chain / Having Troubles Shipping Batteries by Plane? Here Is Why

Several of our clients have increasing troubles shipping batteries alone (that is, not as part of a whole product such as a laptop). The magazine Quality Progress published an interesting article in their March issue. It is entitled “Botched and Dangerous”.

The author starts by setting the stage:

Since December, there have been 52 reported incidents involving hoverboards catching fire. More than two dozen incidents of explosions and fires caused by bad batteries in e-cigarettes between 2009 and 2014 have been reported to the U.S. Fire Administration. The U.S. Federal Aviation Administration has documented hundreds of cases involving batteries from e-cigarettes, laptops, digital cameras, cellphones, electric bicycles, ashlights, GPS trackers, drones—and even a cordless drill—catching fire or overheating on passenger planes.

The culprit is low-cost lithium-ion batteries that are produced by companies with low standards — not by established brands such as Sony or Panasonic. This is an inevitable result of the increasing pressure on pricing and will not surprise anyone familiar with China’s manufacturing sector.

Now, why are airlines worried about transporting Lithium-Ion batteries?

One scenario consumers don’t have control over is what airlines can carry as cargo during passenger flights. Safety concerns over lithium-ion batteries are forcing aviation authorities to address the very real hazard of transporting the items in bulk shipment cargo holds.

About 5.4 billion lithium-ion cells were manufactured worldwide in 2014. A majority are transported on cargo ships, but about 30% are shipped by air. Fires from lithium-ion batteries have the potential to take down airplanes because they are extremely volatile and difficult for on-board fire extinguishers and systems to put out.

Are these unfounded fears? Apparently not.

Since 2006, three cargo planes have been destroyed and four pilots killed in in-flight fires that accident investigators say were either started by batteries or made more severe by their proximity.

As a result, new rules have recently been passed.

Last month, the International Civil Aviation Organization (ICAO), a top-level U.N. aviation agency, voted to ban cargo shipments of these batteries on passenger planes because of the serious hazard. The ban, which takes effect April 1, isn’t binding, but most countries follow the agency’s standards.

In the long term, what is likely to happen? I can’t see such a ban taking wide effect and staying in place for years. It would cause serious problems, for examples when a battery for a medical device has to shipped urgently.

Let’s see what happens next… I guess the rules will get tougher before they relax. What do you think?

Sofeast’s Lithium ion battery safety guidelines for US imports whitepaper is aimed at manufacturers who are producing goods requiring these batteries in China and Asia and seeking to ship them to the USA for sale. In it, we cover everything you need to know about shipping these batteries to the USA, including recalls, product & transport safety, compliance recommendations, and more.

Get your free copy by hitting the link or button below: 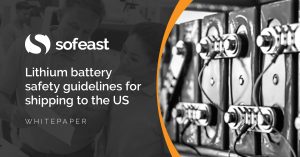