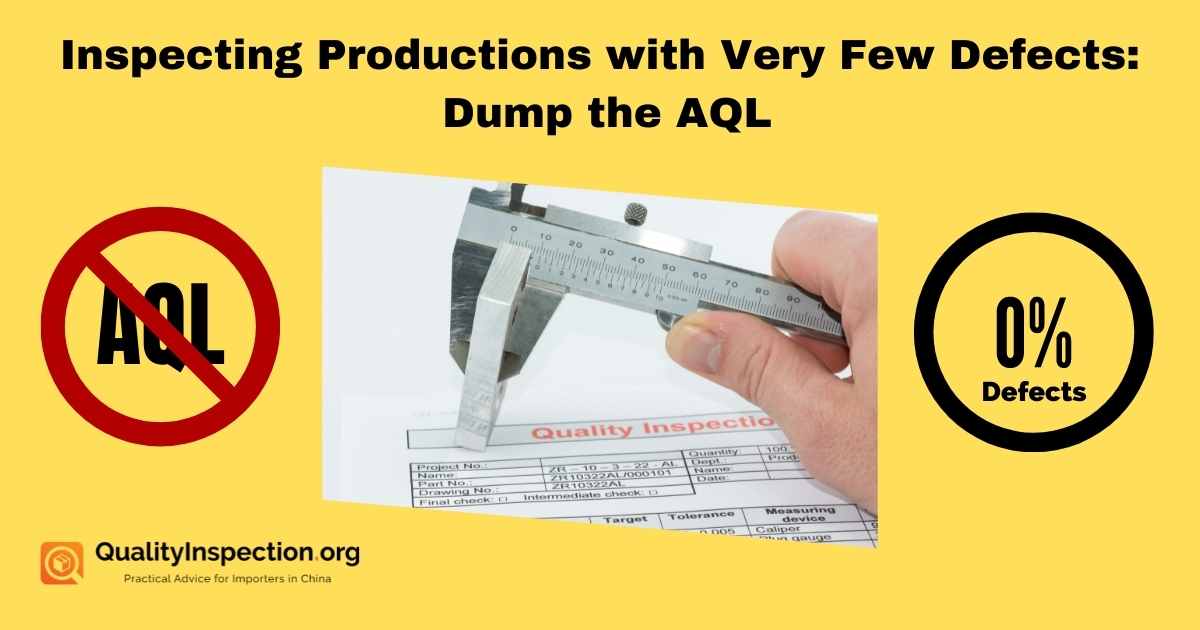 The topic of “do we really need to send inspectors to check productions” and “does that whole AQL concept even make sense” are frequently raised. In this article, I want to write about what it takes to get to a very low rate of defective pieces, and what manufacturing & quality people need to do when they get to that situation.

A reader asked me this question:

I want to ask a question about AQL.

In the last decade, the automotive industry has been advocating zero-defect as the goal and performance standards for the suppliers.

It used to be PPM level. Now it’s PPB (parts per billion).

It doesn’t seem to make sense, given the required performance is Zero Defect. How do you advise quality practitioners to decide on a sampling plan regarding this dilemma?

This reader is spot on. In some cases, a traditional inspection of products has been rendered useless.

On the one hand, some automotive parts have been made with less than 100 parts per million defectives for many years in a row. And there seem to be situations where not a single defect is found for several years.

And, on the other hand, any quality issue on an automotive part is extremely costly. It might shut down the assembly plant, triggering massive penalties. Production gets “contained”, and the supplier has to pay an inspection company to check 100% of their output for a while. In other words, poor quality is not an option.

If your industry is going in the direction of the automotive industry when it comes to quality expectations, what should you do?

First, make sure you use the right type of acceptance sampling plan

As the reader pointed out, thinking in terms of Acceptance Quality Limits (AQLs) is not wise. It makes no sense.

If you still want to do random sampling, go for an acceptance on zero sampling plan. If 1 defective part or product is found, the whole batch has to be put aside, it is that simple. And a side benefit is, that fewer samples need to be checked to get to a pass/fail decision.

Second, move away from acceptance sampling over time

As I wrote in Switching from Acceptance Sampling to Process Control, this new approach requires putting in place a lot of preventive systems, such as:

I read the book Improving Reliability and Quality for Product Success recently, and the author shares his long experience managing manufacturing operations.

Here is an example in which they got to the point where inspections were considered unnecessary.

They made it very clear that quality was the first priority, ahead of production numbers.

They spent intense efforts testing the products and going after the sources of failure:

As quality became highlighted as a factor hindering production quantity, I had the quality manager attach a chart showing the daily state of quality and prepare to test 300 compressors. Two compressors were sampled in the final test each day, and six sets from three assembly lines were tested continuously for 50 days under severe conditions. As the testing of as many as 300 compressors was carried out, test vehicles were designed with simplified architectures and made less expensively. Thereafter, if failures occurred, managers in the appropriate area analyzed them, established corrective actions, and fixed them.

As is typical, some of the issues took more effort and led to redesigning the product and/or the process.

Finally, two issues remained that they could not fix: an electrical short circuit at the small radius of curvature in the enamel coil of the compressor motor and the early wear-out of the crankshaft due to out-of-tolerance machining by machine tools that were not being well maintained. The corrective actions for these issues were to introduce new machines into the motor production line to form the motor coil and improving the precision of the grinding machines that made the crankshaft through proper maintenance. As you might imagine, there was a deep conflict between the product developers and the manufacturing staff as the necessity of additional processes was suggested. The production unit insisted that the motor as designed was difficult to make.

That got them to the point where most processes were nearly flawless, and they no longer needed inspections:

In the long run, the improved compressor became a first-class quality product and the company was flooded with orders, which allowed its price to rise by about 10%. In-depth analyses of issues make the inspection process unnecessary. For this to occur, the capability of the technology related to the quality issues must be strengthened. For motor problems, it is difficult to screen estimated defects in the enamel wire; for crankshaft troubles, inspections are possible but unnecessary.

There are many similar examples, in various industries. What is often missing is the explanation of what preventive actions were taken and which ones moved the needle the most.

How about you, what situation are you in? Struggling to keep quality issues down around 2 or 3%? Pushing that proportion down below 1%? Starting to count it in parts per million? Or truly world-class? How did you get there? Let us know in the comments, please.