You are here: Home / Supply Chain / Was the RMB Suddenly Devaluated? (Just Rumors!)

UPDATE at 2pm China time: it’s confirmed to be just rumors in this article.

UPDATE at noon, China time: Google still shows the same number, but seems to have its information wrong. All other sources seem to indicate very little change (below is from xe.com). 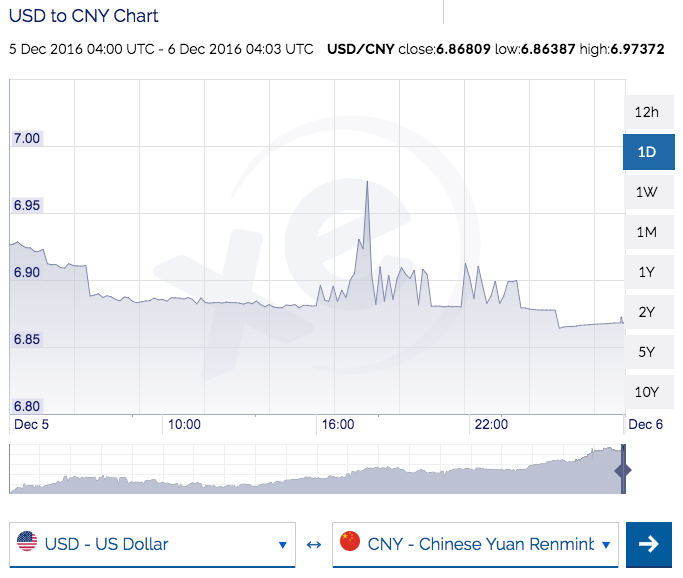 My friend Gaetan alerted me to something surprising this morning… 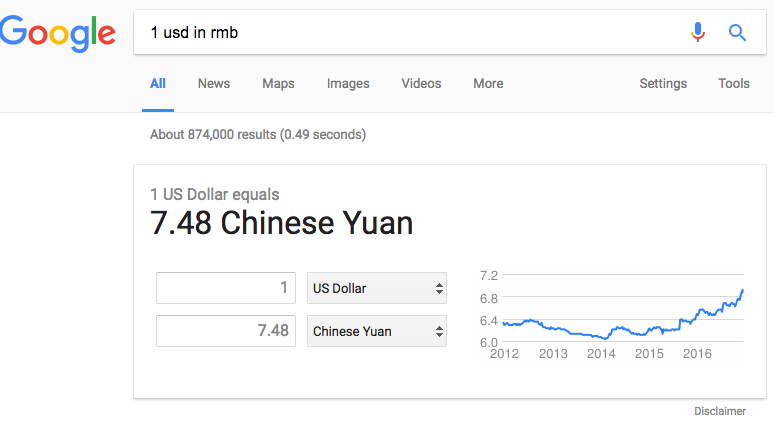 As many companies and individuals sell their rmb, that currency naturally depreciates. (I’d be curious to know how much is due to families that purchase real-estate outside the mainland):

China is trying to tighten its grip on capital outflows after a slide in the yuan this year of almost 6 percent, which has pushed the currency down to levels last seen more than eight years ago and revived memories of a wave of capital flight late last year and in January.

It seems the central bank tries to slow down the depreciation of the RMB through different measures:

Bank of China, the country’s biggest currency trading bank, has begun to sharply limit corporate customers’ ability to purchase foreign exchange in Shanghai, sources said on Friday. Customers who insist on buying foreign currency are being restricted to $1 million, compared with no caps previously.

Among other moves, the State Administration of Foreign Exchange (SAFE) is vetting transfers abroad of $5 million or more, down from $50 million previously, and is stepping up scrutiny of major outbound deals, sources said.

The trend accelerated recently and it seems some hedge funds short-sold the RMB:

The yuan slumped to more than 6.92 per dollar in late November before suspected state-directed intervention gave the currency a lift.

It was trading just under 6.90 on Friday.

The slide has sparked a flurry of bets against the currency.

Or maybe is this massive devaluation due to political motives?

Trump has promised to name China a currency manipulator on his first day in office in January and to slap 45 percent import tariffs on Chinese goods.

He prompted protests from China this weekend by speaking by phone on Friday with Taiwan’s president, something no previous U.S. president had done since the United States switched its diplomatic recognition to China from Taiwan in 1979. 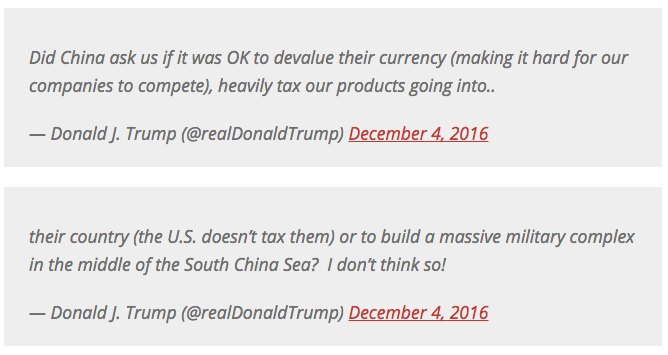 I guess that’s the real reason. When a Chinese party gets upset, it is typical for them to strike back in other ways.

This was explained in a good post from Jack Perkowski, entitled America’s China Agenda at Risk, a few years ago:

I have been involved in a number of scrapes over the years with Chinese partners. This is not unusual, as anyone who has operated in the country knows. Anytime you bring two cultures together, in this case a Western culture with one from China, rough spots are bound to surface. I was always struck, however, by the way in which a dispute in one area with a partner, customer or colleague affects all aspects of the relationship in China. In the United States, we’re used to “compartmentalizing,” not letting a disagreement in one area affect the overall relationship. In China it’s different. You either have a good relationship or you don’t.

When a relationship sours in China, strange and peculiar things begin to happen. For example, when we came into dispute with a Chinese partner, the routine airport pickup by the drivers from the joint venture just didn’t happen. Or, an agreement by the Chinese partner to distribute dividends was suddenly reversed. Or, the reception for the “expert” sent from headquarters to conduct training was anything but warm.

Of course, the explanations given for these actions, or non-actions, seemed reasonable on the surface and unrelated to the dispute at hand. “All of the company’s drivers were tied up transporting customers.” Or, new investment opportunities for the company caused the Chinese partner to reverse its decision to distribute dividends. Or, the so-called “expert” from headquarters simply wasn’t “qualified.” As if by magic, I learned over the years that all of these issues went away once the underlying dispute we had with the partner was resolved.

In any case, this is good news for any company buying from China, especially if they negotiated prices in RMB as I suggested before.