You are here: Home / Risk Management / Why a Supply Chain Map is Valuable for Importers (+ a few Simple Examples) 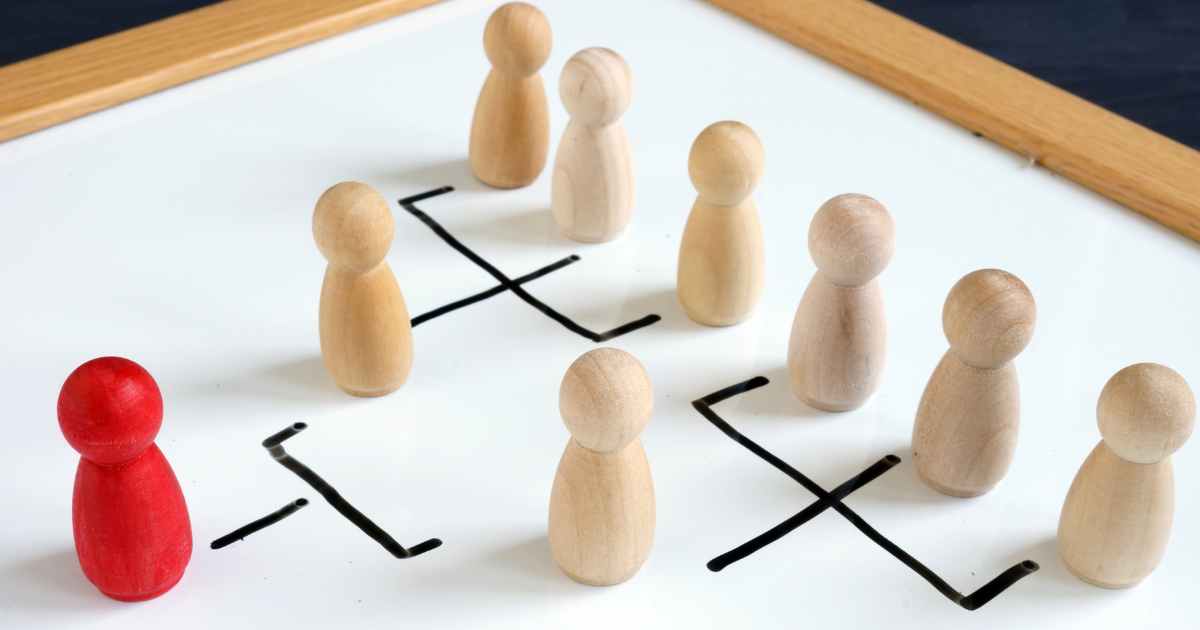 Over the past 3 years, I have read a number of articles pushing importers to draw a supply chain map. They argue it is extremely important, to avoid getting caught by surprise again. (And most of those articles are written by software vendors…who offer a somewhat-automated way to create such a map.)

On the other hand, what is the reality for companies that buy products from China, Vietnam, or other low-cost countries? They’d sure like to have a fully detailed map of their tier-1, tier-2, and tier-3 suppliers. But it is usually close to impossible.

Where to start, to prepare a supply chain map?

Here’s a video walkthrough of an example supply chain map that I made over on Sofeast’s YouTube channel:

Now, let’s go through each step for preparing your supply chain map:

Based on the type of product and what it is made of, an initial ‘theoretical’ chart can be drawn.

Here is a simple example of a supply chain map for a relatively simple & very common product: a lighting fixture. 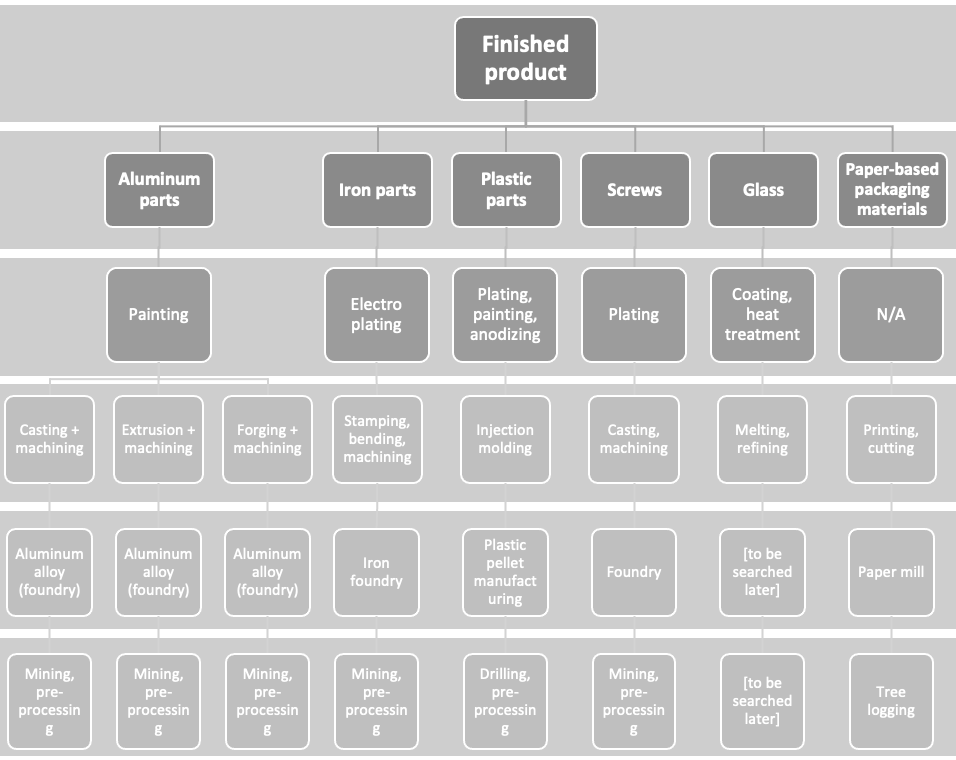 And you can start to collect a little bit of information. You may not be told the company name of the supplier making the aluminum parts, for example, but you may come to know that those parts are made in Dongguan.

2. You can then add the cities

You’ll add cities where items are produced in this fashion:

And here it starts to be interesting. So, only the iron parts and the final assembly are in Vietnam, and the rest comes from China? Most of your supply chain is actually still in China when you thought you had your two feet firmly in Vietnam. Maybe you are still exposed to the “China risk” after all?

3. You can also point to what activities come with a higher risk.

There are various types of risks. Let’s cover two examples:

a) Risk of disruption of supply, for example, due to flooding or an earthquake

Two years ago, in How Much Inventory Do You Need? I described how Ford Motor Company mapped their supplier network. They collected this data, primarily:

Here is a simplified example:

The objective is to keep more inventory as a safety buffer where it is needed. And also to visualize the risk profile, which could lead to changes in the supply chain.

b) Risk of administrative closure of an essential sub-supplier

A few years ago, in an article about factory closures in China, I drew this flow chart: 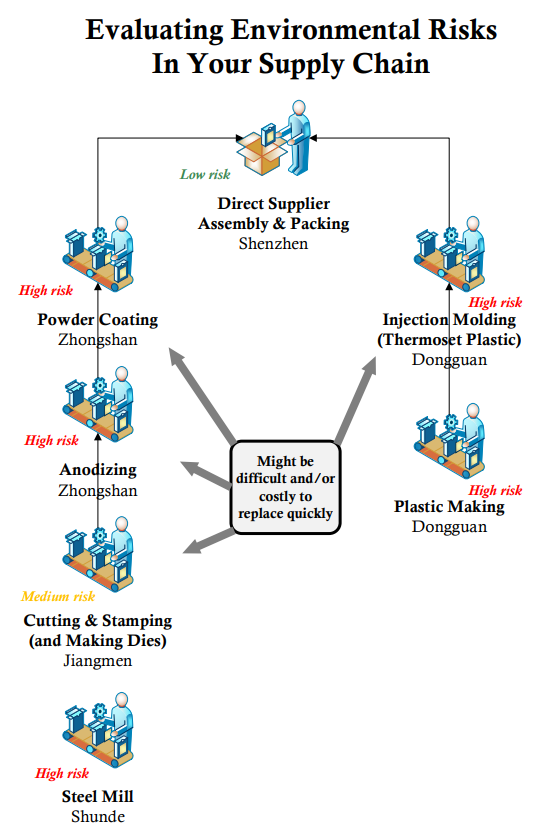 Someone with manufacturing experience can quickly point to what activities are “high risk”.

In 2017, many companies in China were asking themselves these questions because a team of investigators were closing highly polluting factories, sometimes overnight.

That kind of analysis is also helpful when a company starts to assess a product’s environmental impact all through its life cycle (usually in the form of an LCA). Actually, I believe that environment-related compliance will be the major force pushing companies to map their supply chains.

What about the geopolitical risk?

It is what all companies buying products in China and selling them to the USA, Canada, Australia, and the UK are talking about these days. Those selling into continental Europe are somewhat concerned, too.

American congressmen keep pushing for ways to punish China. (I believe the word “punish” is an appropriate one here, based on their rhetoric.)

Their latest attempt is described in It’s time to revoke China’s normalized trade relations | The Hill:

Shortly before Thanksgiving, the U.S.-China Economic and Security Review Commission, which somewhat ironically was established by virtue of normalizing trade relations, called on lawmakers to review China’s adherence to the commitments it made when the U.S. granted its trade sinecure back then.

If China is found to be out of compliance, the commission argues, those trade relations should be suspended. And there is no question that if put to a new vote today few members of either party would extend another blank check.

Now, that would allow for higher import duties, for more tariffs, and/or a number of other measures. Scary.

People are also watching where Apple, which is so dependent on China (just like nearly all consumer electronic companies), is headed.

The WSJ came out with Apple Makes Plans to Move Production Out of China:

In recent weeks, Apple Inc. has accelerated plans to shift some of its production outside China, long the dominant country in the supply chain that built the world’s most valuable company, say people involved in the discussions. It is telling suppliers to plan more actively for assembling Apple products elsewhere in Asia, particularly India and Vietnam, they say, and looking to reduce dependence on Taiwanese assemblers led by Foxconn Technology Group.

What is pushing Apple to accelerate its shift outside of China?

The Zhengzhou factory was convulsed in late November by violent protests. In videos posted online, workers upset about wages and Covid-19 restrictions could be seen throwing items and shouting “Stand up for your rights!”

And what are the challenges they will face in India and Vietnam?

Executives [from another contract manufacturer, Luxshare] referred to what is known as new product introduction, or NPI, when Apple assigns teams to work with contractors in translating its product blueprints and prototypes into a detailed manufacturing plan.

In many cases, the NPI work is done in China, tooling is made in China, pre-series production runs are made in China, and then it’s all transferred to another facility in another country for mass production. But Apple doesn’t want that, as it is a bit clunky.

Apple has told its manufacturing partners that it wants them to start trying to do more of this work outside of China, according to people involved in the discussions. Unless places such as India and Vietnam can do NPI too, they will remain stuck playing second fiddle, say supply-chain specialists.

What is Tim Cook’s mid-term plan? Some observers have an idea about it:

Apple’s longer-term goal is to ship 40% to 45% of iPhones from India, compared with a single-digit percentage currently, according to Ming-chi Kuo, an analyst at TF International Securities who follows the supply chain. Suppliers say Vietnam is expected to shoulder more of the manufacturing for other Apple products such as AirPods, smartwatches and laptops.

That sounds like a more balanced risk profile, doesn’t it?