You are here: Home / Sourcing New Suppliers / Buying in China is a risky game

Buying directly in China is risky. Very risky, depending on the amount of money a company commits to a given order and to the steps it (doesn’t) take to secure it.

Exactly one week ago, a small American buyer told me “I should have listened to you”. Last year I offered my services to control his products’ quality in China, but instead he chose to save a bit of money. He received products that could not be sold to his main customer, and it “nearly put him out of business”. He had to deduct some cash from his retirement plan…

If there is one authority on the evaluation of risk and reward, it is the exceptionally successful investor Warren Buffet. I remember watching a video where he said: “risking what you need, just to get something you don’t need, is just stupid”.

Buyers should think twice about it. From what I see, there are mainly three reasons why China adventures can result in heavy losses:

1. Lack of education: buyers transpose their domestic buying habits to China. They don’t perceive major risks. Often they don’t even know about quality inspections (some buyers saw my booth this week, asked what we were doing, and then said “wow, that’s a good idea!”.)

2. Poor understanding of what is at stake: importers under-estimate all the time and expenses that really went into a given order.

When quality control is seen as an insurance on a large sum of money, a buyer is more easily convinced… That’s why I like to put things into perspective: 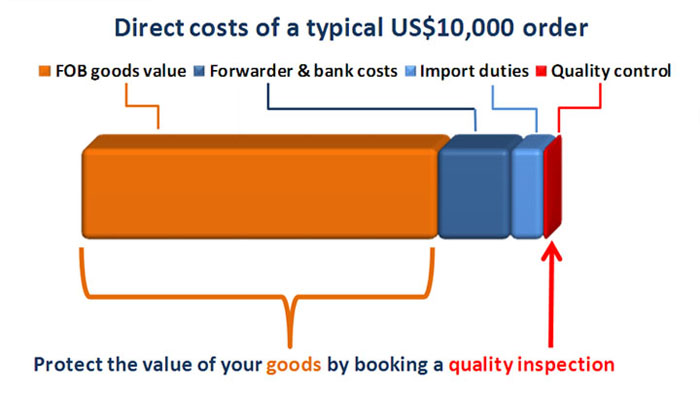 3. Economics: small orders are given to different suppliers, resulting in very tight margins. It is psychologically difficult to sacrifice half the margin for a service that is not seen as necessary (back to the education problem…).

David Dayton wrote a very good article about it:

“All the suggestions you’ve made (QC, background checks, testing, etc.) take all the possibility for profit out of the orders from China.”

First, if you’re ordering $10,000 or more and you can’t afford to spend $600-$900 on QC and some background checks then you’re in the wrong industry.  This is less money than the cost of the ticket that you bought to fly to the tradeshow (which, if you asked me is not where you should be spending your money anyway). $1000 could be lost in a customs delay, a very small percentage of crappy product, penalties from a DC for missing a shipping date, small changes in prices of goods, etc.

Second, if your margins are too tight to be able to pay for testing (to meet legal requirements in your home country) then you’re asking to be put out of business (and maybe in prison too).  This isn’t my “suggestion” these are legal requirements!!

Finally, after almost 20 years in Asia, I believe that you’ll have better odds at Macao than you do of getting $10,000+ dollars worth of product without having defects or rejects that are worth less than the costs of QC.  Why take the risk?

China is as risky as you make it.  You can eliminate MOST of your risk for a relatively little amount of money.