You are here: Home / Sourcing New Suppliers / The effect of China inflation for foreign buyers

Many importers have been forced to accept sharp price increases in 2010 and 2011. And everybody is wondering, how long will it take before China loses its price competitiveness?

I am hearing over and over from my Chinese friends who own factories that line workers and especially mid level managers are asking for paychecks that are based on a perception that inflation will increase dramatically and that the economy will keep expanding so there will be more and more jobs at higher and higher wages for everybody.

As an American looking back at how fast things changed almost overnight with the Global Financial Crisis (GFC), I say to my Chinese brethren…the good times don’t last, you may not have felt the full squeeze of the GFC, but things can change REAL fast. Even in China.

Many job searchers today in China base their salary expectations on how the CPI (consumer price index) has been moving in past months in a (false, I predict) assumption that it will continue to rise in future years at the current pace. The CPI is not linear (I pray!). Their bravado in asking for a higher and higher salaries has been bolstered by news in the 2010 press and early 2011 that exports in particular, and the economy in general, are expanding.

The article predicts that Beijing is working on slowing inflation down, and that it is one of their top priorities. I can see why higher food and housing prices are a threat to social stability and to a “harmonious society”.

A lower inflation rate is good for foreign buyers. But my fear is that the exchange rate of the RMB will go up, as a remedy against inflation. A stronger currency allows for cheaper imported goods, slows down exports and overall production, and calms inflation down.

How was the RMB/USD echange rate over the last 12 months? The dollar depreciated by 4.5%. This trend might well accelerate. 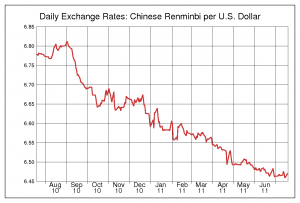 For a bit of historical perspective: in the 12 month preceding the Beijing Olympics, the RMB had gained nearly 10% against the dollar.