You are here: Home / Supply Chain / Dangerous gases in containers 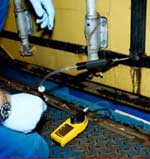 Last weekend I got an interesting email conversation with my friend Paul Wijmenga. He lives in Xiamen and helps European importers source softlines such as shoes and garments.

Some of his shipments got stopped in the Port of Rotterdam because the Dutch Inspection Authorities detected an excessive level of dangerous gases. The Dutch government has stepped up its efforts to block such shipments, both for consumer and workers protection.

Last year, two containers of shoes were blocked because of high levels of dichloroethane and toluene. And recently another one because excessive levels of toluene and ammoniac were detected.

Where do these dangerous gases come from?

Our theory is that the glue used by the shoes factories (which comes with a strong smell) might be the main origin of these gases.

But it could also come from many other sources:

How to avoid a high level of dangerous gases in containers?

Container inspection companies in Holland told Paul there are many potential origins, and that the level of dangerous gases usually increases during freight. So, most of the time, checking the container in China is useless.

Shipping companies told him this issue was nonsense; opening the doors for 15 minutes should be enough to get rid of unsafe chemicals. Unfortunately the Dutch Labor Inspectorate doesn’t see it that way.

So he took the following temporary measures:

I advised Paul to use special polybags that close with a Ziploc system, but it seems like the customs also check gases inside the bags. He might also want to try to contact the glue suppliers, to get their advice (or at least the composition of their product, as a basis for analysis).

We are wondering if any reader has experience dealing with these issues.

If you have any idea, we would love to get your comments. Thanks a lot!