You are here: Home / Sourcing New Suppliers / Overview of the Vietnam Manufacturing Sector 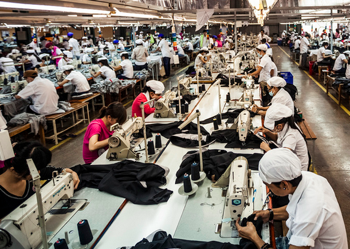 Our marketing assistant Maria has done research on the Vietnam manufacturing sector: the top export industries, the trends, the labor costs, and logistics.

Here is her article.

Out of all Vietnam manufacturing sectors, the most known would probably be the textile industry. Due to extremely competitive wage policies, one of the lowest in the region, textile and clothing has become the largest contributor to Vietnam’s exports. Thanks to the bilateral agreement with the US in 2000 coupled with WTO membership in 2007, the country’s textile industry now comes second to China as the top clothing and footwear supplier of the USA. The most recent data of the US Office of Textiles and Apparel (OTEXA) records textile imports from Vietnam as having 8.38% share of the whole US market, still a far cry but continuously catching up with China’s 47.97%.

The Ho Chi Minh City Association of Garments, Textiles, Embroidery and Knitting (Agtek) and the Vietnam Textile and Apparel Association (Vitas) credit the country’s production power to the more than 2,000 garment and textile enterprises scattered all over the nation, composed of “50 state-owned enterprises (SOEs), 1,400 private enterprises and 450 foreign direct investment (FDI) enterprises”. 200 of these are foreign-invested and are based in Ho Chi Minh.

We can only predict that the numbers have no way to go but up. Recently, Vinatex and petroleum magnate PetroVietnam built a $200 million plant in the port city of northern Haiphong. The plant has the capacity to produce about half of the demand for domestic yarn through synthetic fibre processing.

Electronics has successfully inched its way to the top. This electronics sector now leads the country’s total exports, effectively overtaking the textile industry as Vietnam’s largest export. Foreign manufacturers continue to flow in due to Vietnam’s lower costs and wages as compared to China’s alternatives. Samsung Electronics Co and Nokia Oyj are just some of the major electronics manufacturers which availed of this booming sector. Samsung, for one, is building a $2 billion plant with a capacity to make 120 million handsets annually up to 2015. According to Vietnam’s General Statistics Office, the electronics sector drove Vietnam’s exports to grow by 15.4 percent between the years 2012 to 2013. Electronics production zones have been set up in Ho Chi Minh and Hai Pong.

Aside from textile and electronics, other manufacturing sectors have been identified as key industries: “motor vehicles, shipbuilding, food processing, steel, petrochemicals, and software” (According to a proposal by Vietnam’s Central Institute for Economic Management). There are also support industries such as “engine manufacturing, flat steel products, agricultural products and raw materials including crude oil, composite plastics, artificial rubber, aluminum and synthetic fibers.”

These manufacturing industries are mostly (up to a third of the total number) located in Ho Chi Minh. The city has a total of 16 zones focused on industrial, export-processing and high technology manufacturing. Zones outside HCM namely Vietnam-Singapore Industrial Parks I & II in Binh Duong and Amata Industrial Park in Dong Nai are also havens for manufacturing.

Ports – left behind but now catching up 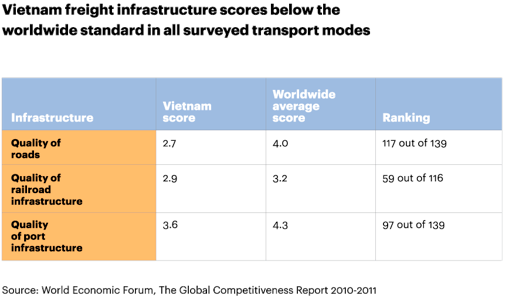 As a consequence, internal freight costs are relatively high:

Despite government efforts, Vietnam’s ports still leave a lot to be desired. It has 114 seaports, 14 of which are named as major ports. The new Saigon port complex aims to fill the gaps by conveniently situating itself among the industrial parks and export processing zones of Ho Chi Minh, Binh Duong, Dong Nai and Ba Ria – Vung Tau. The new port in Dung Quat and Quang Ninh aims to supplement Saigon’s capacity as well.